Back in November 2013, I interviewed author Peter Tickler for my WordPress blog. I hope you enjoy it...
Welcome to another of my blog interviews with novelists, poets, short story authors, biographers, agents, publishers and more. Today’s is with crime novelist Peter Tickler. A list of interviewees (blogged and scheduled) can be found here. If you like what you read, please do go and investigate further.
Morgen: Hello, Peter. Please tell us something about yourself, and how you came to be a writer. 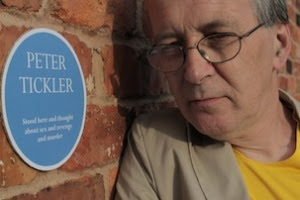 Peter:  I think writing crept up on me when I wasn’t looking and prodded me in the ribs. My first published piece was one on war-gaming, when I was about 18. I was thrilled when the magazine not only published it, but sent me a cheque for £20. I sent two more articles. They published those too, but somehow no further cheque ever arrived in the post!
Morgen: Oh dear. My first published piece was a 60-word story in Woman’s Weekly for which I got £10 (not a bad word rate). I’d sent them a whole page of stories and the one they picked (‘Pizza Payback’ which they renamed ‘Payback’) was the first one so I thought they’d print more but sadly they stopped doing the 60-worders a couple of months later. You generally write crime novels, have you considered other genres?
Peter:  Not as yet. I have written a number of monologues based on biblical stories for my local radio station, but I’ve never tried other fiction genres.
Morgen: You have had three novels published to-date? Have you ever been tempted, or indeed written, under a pseudonym?
Peter: No. I guess I’d have to be pretty embarrassed about what I had written to do that.
Morgen: :) Your books are available as eBooks – how involved were you in that process? Do you read eBooks or is it paper all the way?
Peter:  When I signed my contract for Blood on the Cowley Road, electronic publishing rights were not even included. Later they sent me an addendum to sign. As far as I am concerned, eBooks is something that happens at some point after the hardback has been published, with no extra input on my part.
Morgen: It’s very easy to do (I have a guide for indie publishers to do their own) and the great thing is if you wanted to change anything (perhaps update factual events), it’s just a case of re-uploading a Word document. You mentioned hardbacks, are they released first in that format and then in paperback? Do you think the format matters?
Peter: Yes, they are, but interestingly the time gap between the publication of the two has become increasingly shorter.
Morgen: I know a couple of authors whose publishers have stopped doing hardbacks and Amazon sell less of them than any other format, which is a shame because I prefer them to paperbacks (I’m a don’t-like-damaging-paperback-spines reader). Your books are set in your home area of Oxford, how important is location to your writing and have you had reader feedback about the city?
Peter:  I love writing about Oxford because I have lived there so long (and also studied as a student). Describing it accurately is important to me, though of course sometimes I do just make buildings and even streets up. But if I can set a scene in an ice-cream shop that really exists (see Blood on the Marsh for that), I will. People seem to really like the authenticity of the locations. One man queried my depiction of Grandpont as being Labour voting and Guardian reading, but it turned out he had lived in Grandpont thirty years previously.
Morgen: Oh wow. That’s the joy (or sometimes the opposite) of reader feedback. I love it – even when I had a lady on Goodreads say she hated one of my stories (Feeding the Father, based on a true story) so much she vowed never to read anything by me again (which is a shame because she’s previously said how much she’d loved another (April’s Fool). You’re a fan of the football club, Oxford United, and you wrote for their programme recently, has the club, or the sport, ever featured in your fiction?
Peter:  There are always references to Oxford United. I have set scenes in the Oxford Mail stand and the boxes, some Oxford fans get killed, and Blood on the Marsh was inspired by a real Oxford United match. In addition, all my solicitors share surnames with players I have enjoyed watching.
Morgen: That’s funny. I bet the players are chuffed. Oxford is the basis for Colin Dexter’s Morse – minus the frequency of the murders, how realistic are his novels and the TV series to Oxford life?
Peter: If you read Dexter’s novels, they are much more town-centred than the TV versions and as such much more true to Oxford as a city. There is a lot more to Oxford that Oxford colleges and students. I have to admit I get fed up with the way the Lewis TV series is so centred on a few university buildings and I guess I set out to avoid that in my books.
Morgen: It’s interesting that book:TV are that different. I met you at an author talk, here in Northampton, recently and there are various literary festivals in the area, including the Sunday Times Oxford Literary Festival and the Chipping Norton Literary Festival. How important are live events to you, and to authors generally?

Peter:  Personally I think any public exposure is helpful to authors. I recently did a ‘gig’ at my first festival (in Wantage), but I have spoken at libraries in several counties, U3A meetings and even one of Her Majesty’s Prisons. It is important to put yourself out there and also I find it a lot of fun. Of course the big festivals are dominated by the big authors, so they are not much help to smaller authors like myself trying to grow their readership. I was invited to speak at Wantage after the organiser saw me talk at a library, so that was very flattering.
Morgen: Hopefully Chipping Norton will ask you at some stage. I’m been a volunteer there so I’ll put in a good word. :) In the video on your website’s home page, you encourage readers to borrow your books from the library (I’ve heard that some authors actually earn more from library borrows thanks to PLR) and indeed I met you at the aforementioned library talk (with Stephen Booth), how important are libraries to writers these days?
Peter:  For smaller writers, libraries are very valuable for both buying copies and then lending them out. PLR on my three published crime novels is into three figures, so it is a handy bonus to the royalties. Libraries also lend out e-books now, which generates not PLR but some extra royalties.
Morgen: Oh, do they? That’s interesting. I read more eBooks than any other format, although I volunteer at a Red Cross shop so some of my paperbacks come that way (or from author talks). Do you have a favourite of your books or characters?
Peter:  My main character is Detective Inspector Susan Holden. She is a rather sharp and aggressive, and not especially sympathetic, but I am very attached to her. She also has a sparky relationship with her long-suffering mother. In the current manuscript, she is attending anger management sessions – I am not sure if that will change her, but I shall love her nevertheless!
Morgen: Sharp is good. There’s little more annoying than a ‘damp squib’ of a main character. If your books were audiobooked, whom would you have as the narrator(s)?
Peter: Olivia Colman or Helen Mirren if either were available – as long as I get a chance to meet them over lunch!
Morgen: I’d be happy with either of those. Which authors did you read when you were younger and did they shape you as a writer?
Peter: Enid Blyton (Famous Five series), Rosemary Sutcliffe, Mary Renault and Daphne du Maurier. I think they convinced of the joy to be found in reading a good story.
Morgen: All writers should be readers too. <note to self: read more!> Did you choose the titles / covers of your books? 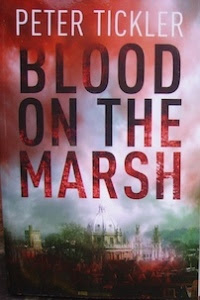 One of my favourite Beatles’ songs is ‘The Long and Winding Road’. Actually it takes the bronze medal in my personal Olympics, behind ‘Hey Jude’ and ‘Eleanor Rigby’, but this is meant to be a column about writing, so enough of that!
Anyway the long and winding road seems a pretty good metaphor for the process of writing a book and getting it published.  A book starts with an idea and ends with a physical and/or virtual object that people can read. In between there’s a heck of a lot that can happen.  Some writers are very organised and take the very direct route. Ian Rankin writes a first draft in six weeks – I read this in the Daily Mail so it must be true. He then does his research, then a second draft (throwing in red herrings etc.), shows it to his wife for her comments and then finally a third draft before sending it to the publisher.  Six months in all. ‘Simples’ as the TV meerkat would say.
By contrast Michael Frayn, writing about the genesis of his brilliant Spies, says that the ‘first indistinct notions’ of the book came into being in 1991 – a tale seen through the eyes of a small boy. Only in 1996 however did it become clear in Frayn’s mind what the boy’s friend’s mysterious mother was up to. By 1999 the main plot seems to have been fairly clear in his mind and he wrote a ‘treatment’ and series of drafts over two years before it was published in 2002.
But the long and winding road doesn’t end with the delivery of the manuscript. ‘There may be trouble ahead’ as the Irving Berlin song tells us: revisions requested by the publisher (‘too long’ is a familiar response in my experience) and then the vagaries caused by being slotted into the publisher’s schedule. Finally it is published. But even that is not the end. There are the delayed payment of royalties. For example, my Blood in Grandpont was offered for £0.99 by Amazon for a month in November 2012 in their under £2.99 scheme.  There was a massive splurge of sales, but no money got to me until September 2013! Last November was also the month in which the Canadian paperback rights were sold for my Blood on the Marsh. Eleven months later, I have just heard it will be published April 2014!
And a synopsis of Peter’s latest book…
Blood on the Marsh is a whodunit involving death in an care home, a real Oxford United game, railways and the theme of parenting.  The reviewer in the Oxford United programme called it ‘mature, thought-provoking and highly recommended’. Who am I to disagree?
***
** NEW!! You can now subscribe to the mixed blog on your Kindle / Kindle app via Amazon.co.uk or Amazon.com **