Back in February 2013, I interviewed author Clarissa Johal for my mixed WordPress blog. I hope you enjoy it...
Welcome to the six hundred and forty-seventh of my blog interviews with novelists, poets, short story authors, biographers, agents, publishers and more. Today’s is with YA fantasy and paranormal fiction author Clarissa Johal. A list of interviewees (blogged and scheduled) can be found here. If you like what you read, please do go and investigate further.
Morgen: Hello, Clarissa. Please tell us something about yourself, where you’re based, and how you came to be a writer.

Clarissa: Well, I’ve lived in a lot of places but for now, I’m based in North Carolina, USA. I started writing when I was young, as most writers do. My family moved around a lot and I was very shy and found it was a way to make a connection where there was none. I also found it silenced the chattering in my head.
Morgen: All the characters having a party perhaps. :) What genre do you generally write and have you considered other genres?
Clarissa: I started writing young adult fantasy fiction. In fact, I was working on my second instalment to Pradee, when I was hit by two characters that didn’t belong in this YA series or any young adult fiction, actually. At that point, I stopped what I was writing and began Between, which is adult paranormal fiction. I really like the adult paranormal genre because it leaves so much wide open and gives me the freedom to explore as a writer. I’ve continued writing instalments to my young adult fantasy on the side, but for now, the genre of adult paranormal and paranormal horror seems to be my calling.
Morgen: Paranormal’s an incredibly popular genre. I’ve not written any but I wouldn’t mind trying. You mentioned two books, what have you had published to-date?
Clarissa: Pradee is available on Amazon.com and barnesandnoble.com. Between was released through Musa Publishing on December 14, 2012 and is available on the Musa Publishing website, Amazon.com (http://www.amazon.com/Between-ebook/dp/B00ANXNGTG), and barnesandnoble.com.
Morgen: You’ve self-published, what lead to you going your own way? 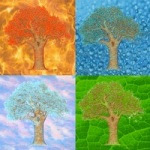 Clarissa: Pradee was self-published. Several years ago, I was submitting Pradee to various publishers and agents and, while I was getting great feedback, the economy at the time wasn’t very good in the USA. Therefore, the publishers and agents were reluctant to take on a new author. Eventually, I decided to publish through Lulu.com and then Createspace.com. It was good because it gave me experience with the publishing and advertising process from start to finish. I learned a lot.
Morgen: And am still learning, probably (I’ve self-published, though just eBooks so far). Are your books available as eBooks? Do you read eBooks or is it paper all the way?

Clarissa: Between and Pradee are both available as ebooks. I read both ebooks and paper. There are certain books I want on my shelf because they make me feel clever and well-read and others I’m content to carry on my Kindle. Especially the naughty ones.
Morgen: <laughs> Do you have a favourite of your books or characters? If any of your books were made into films, who would you have as the leading actor/s?
Clarissa: I have to admit, my favourite character is Cronan from my paranormal novel, Between. He was just so complex and there was so much going on with his backstory. If I were to meet him in person, however, I would probably run away because he’s so intense.
I would love for both Between and Pradee to be made into films. Pradee would have to be A Dark Crystal or Neverending Story kind of production, because there are so many creatures in it. It would be awesome if Tim Burton could direct that one, I think he would “get” my vision. Between would make a good film if they could focus on the philosophical and historical components and not make fluff out of it, as I see happen with many good novels. I do have actors that I would consider a good fit for Between but I prefer not to share. I like people to have their own images when they’re reading my novels.
Morgen: Tim Burton’s great, isn’t he. I love quirky. Did you have any say in the titles / covers of your books? How important do you think they are?