Back in December 2012, I interviewed author Rory Freckleton for my WordPress blog. I hope you enjoy it...
Welcome to the five hundred and ninetieth of my blog interviews with novelists, poets, short story authors, biographers, agents, publishers and more. Today’s is with young adult novelist Rory Freckleton. A list of interviewees (blogged and scheduled) can be found here. If you like what you read, please do go and investigate further.
Morgen: Hello, Rory. Please tell us something about yourself, where you’re based, and how you came to be a writer. 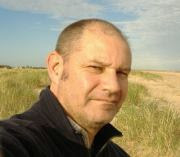 Rory: I live in Shropshire and teach science, chemistry mainly; I have been doing this in various parts of the West Midlands for thirty years. It is only in recent times that I’ve even considered the possibility of writing. My first book was very much an experiment in how far I could push things before people said I was wasting my time. Much to my surprise, admittedly with some bumps along the way, it got to the stage of being published. I was always struck by the power that books had to influence young people and was keen to try a novel aimed at the older teenager / young adult market. Having suffered myself from the isolation of being a gay teenager in a straight world, I was keen to write an adventure story where the principal protagonists were gay, were strong and had positive outcomes. The boy gets the boy rather than the girl for a change. I did feel there was a potential niche market here that was not being well served by the standard fare in most bookshops.
Morgen: They say to write what you know and I’m sure a reader can tell that a book is richer for it. What genre do you generally write?
Rory:  I have written adventure fiction aimed at young adults so far.
Morgen: What have you had published to-date? Do you write under a pseudonym?
Rory: I was advised not to use a pseudonym and have published as ‘R S Freckleton’. My one book to date is called ‘The Guardians of the Rainbow’ and it is published by Mirador Books.
Morgen: Great title. Have you self-published?
Rory: No I have not self-published. Mirador is an interesting publishing partnership enterprise which is definitely geared up to modern trends of cheap paperbacks and e-books. I can’t see that it would have been of any benefit to me personally to self-publish once I’d been offered a deal by Mirador.
Morgen: Being happy is the most important thing. You mentioned eBooks so your book is available as an eBook, presumably, how involved were you in that process? Do you read eBooks or is it paper all the way?
Rory: I’m still very traditional in the way I read. I will get a Kindle soon, but I’m waiting for the price to come down just a little more first! My book is available as an e-book. Mirador sorted all of that out, for which I am most grateful.
Morgen: Do you have a favourite of your characters? If your book was made into a film, whom would you have as the leading actor/s?

Rory: I have indeed thought about this. There is an actor called Jonathan Bailey who has appeared in a number of TV series who would be excellent as Darryn, the handsome, dare-devil secret agent who rescues both Jake and Nathan from the clutches of the enemy. Also I’d love to have Lyndon Ogbourne, much missed from ‘Emmerdale’, playing Martin, Darryn’s ex, who has gone straight and become his nemesis. He is one of those actors who have a knack of becoming incredibly sexy the more evil their character develops. For a bit of gravitas, I’d have Sir Ian McKellen as Sir Digby Forester and Dame Judi Dench as his housekeeper. For good measure I’d have Stephen Fry as No6, Julie Walters as Jake’s mother and the glamorous Keira Knightley as Annabelle. Ah well – I can dream!
Morgen: I don’t Jonathan Bailey so I Wikipediad him, http://en.wikipedia.org/wiki/Jonathan_Bailey_(actor), but great name. :) I used to watch Emmerdale but pre-http://en.wikipedia.org/wiki/Lyndon_Ogbourne days. The rest of the cast I do of course know, a brilliant line up. Which authors would you compare your writing to?
Rory: I wouldn’t directly compare myself to anyone in particular. I hope I’ve picked up a few things from authors I admire such as Tolkien, Thomas Hardy, John Le Carré and C.S. Lewis.

You can sign up to receive these blog posts daily or weekly so you don’t miss anything. You can contact me and find me on the internet, view my Books (including my debut novel!) and I also have a blog creation / maintenance service especially for, but not limited to, writers. If you like this blog, you can help me keep it running by donating and choose an optional free eBook.
For writers / readers willing to give feedback and / or writers wanting feedback, take a look at this blog’s Feedback page.
As I post an interview a day (amongst other things) I can’t unfortunately review books but I have a list of those who do, and a feature called ‘Short Story Saturdays’ where I review stories of up to 2,500 words (and post stories of up to 3,000 words). Alternatively if you have a short story or self-contained novel extract / short chapter (ideally up to 1000 words) that you’d like critiqued and don’t mind me posting it online in my new Red Pen Critique Sunday night posts, then do email me. I am now also looking for flash fiction (<1000 words) for Flash Fiction Fridays and poetry for Post-weekend Poetry.
Posted by Morgen With An E at 18:00