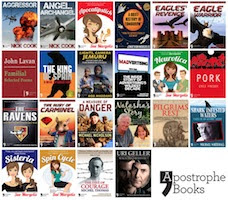 ***
If you are reading this and you write, in whatever genre, and are thinking “ooh, I’d like to do this” then you can… just email me and I’ll send you the questions. You complete them, I tweak them where appropriate (if necessary to reflect the blog ‘clean and light’ rating) and then they get posted. When that’s done, I email you with the link so you can share it with your corner of the literary world. And if you have a writing-related blog / podcast and would like to interview me… let me know.
** NEW!! You can now subscribe to this blog on your Kindle / Kindle app!
See http://www.amazon.co.uk/gp/product/B008E88JN0
or http://www.amazon.com/gp/product/B008E88JN0 for outside the UK **