Back in July 2012, I interviewed author Ian S Rutter for my WordPress blog. I hope you enjoy it...
Welcome to the four hundred and twenty-sixth of my blog interviews with novelists, poets, short story authors, biographers, agents, publishers and more. Today’s is with children's faery tale fantasy and horror author Ian S Rutter. A list of interviewees (blogged and scheduled) can be found here. If you like what you read, please do go and investigate further.
Morgen: Hello, Ian. Please tell us something about yourself, where you’re based, and how you came to be a writer.

Ian: Yes, as I do everything. If you had seen the original cover for the faeries story, you would of thought how terrible and amateurish it was. It was actually what I used at the beginning for the podcast downloads. Halfway through, I changed it and the owner or host of the website, Evo Terra said it was a lot better. When the eBook came along, I needed a better, more visually striking image. I came up with a few ideas, pasted them together and sent it to my sister who knows a few artists. They kindly gave me their professional advice, and what I have now is the result. (I hope you like it)
The importance cannot be overstated. As a reader, it's the first thing you will see, and some just won't read the blurb unless they like the cover. I believe the cover should be able to tell you a portion of the story without you having to open up the book or read the blurb.
Morgen: It should absolutely. :) What are you working on at the moment / next?
Ian: A ton of stuff!! The sequel to the faery book. Re-editing Solomon's Temple. Getting the faery book 1 ready, for Smashwords so it can be distributed through the other digital channels.
I didn't do that first, as I am signed up for Amazon KDP programme. I did that as an experiment and the results are interesting. On my blog I have the results that have even surprised some authors that have seen my figures. They are very good. (I've been told) Now it makes me wish I didn't sign up for KDP. You have greater control over the price when you are not in the KDP programme. (that's life!) But, after the 90-day contract has finished I will not be signing again (interesting!)
Morgen: Three months goes so quickly that I don’t think signing up with KDP does any harm (some people may disagree with me). I’ll probably do it with my first novel (my third novel but the one that’s almost ready). Do you manage to write every day? Do you ever suffer from writer’s block?
Ian: At the moment yes. I first try and write up an article for my blog. I have set it up so that as soon as a new article I have written is finished, it gets posted to Facebook, Twitter, LinkedIn, and Google Plus, then I write something for Goodreads or Shelfari, such as a review of a book, that again automatically gets posted to Facebook and Twitter. After a thousand cups of tea, I get down to writing or editing one of my stories and after that, if I have time, some reading. (phew!!)
Morgen: :) Do you plot your stories or do you just get an idea and run with it?
Ian: Both. I usually write the end of the story first so I have a path or a conclusion to get to. It also motivates me to finish the story. I have been playing with a story map, or mind map. I have notes and sheets of paper stuck together. It looks like a treasure map with a twisty path flowing through it.
If I get an idea, I will always run with it. It's just too dangerous not to, in-case it turns into something that ends up being your next book. I think if you could look inside my head, you would see a huge messy playground of adventures!
Morgen: :) I think most writers’ brains would be scary… mine would be really dark. Do you have a method for creating your characters, their names and what do you think makes them believable? 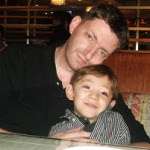