Back in September 2011, I interviewed author Alberta Ross for my WordPress blog. I hope you enjoy it...
Welcome to the one hundred and thirty-seventh of my blog interviews with novelists, poets, directors, bloggers, autobiographers and more. Today's is with novelist and short story author Alberta Ross. A list of interviewees (blogged and scheduled) can be found here. If you like what you read, please do go and investigate the authors further.
Morgen: Hello Alberta. Please tell us something about yourself and how you came to be a writer. 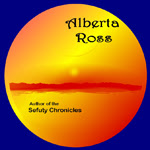 Alberta: Well I’m retired and fast approaching my seventh decade.  As a very young child I had scribbled stories in exercise books but never taken it any further. I spent most of my youth travelling and then, suffering from a menopausal hiccup, at 40 decided I’d take myself to university coming away eventually with a BSc Hons and an MA.  Then, while virtually housebound nursing my mother, in about 2006/7 I decided I’d have another go at writing.  That was when Ellen’s Tale first saw light of day.  I took the decision at the beginning of 2010 to come out and declare I was a ‘writer’, an ‘author’. I had self-published Ellen’s Tale by then and had almost finished the sequel The Storyteller’s Tale so it was time to stop feeling guilty about time spent on the computer and go for it.
Morgen: I like that, to ‘come out’. :) What genre do you generally write and have you considered other genres?
Alberta: The series I am writing at the moment is Dystopian but I also write in various others in my short stories and in November am attempting in the NaNoWrMo (http://nanowrimo.org) challenge to write a modern day novel.
Morgen: Oh great! I’ve done it (and 'won' it - completed the 50,000 words) three times (and plan to again this year). I’d recommend it to anyone especially if they’re anything like me, better with deadlines. What have you had published to-date?

Alberta: The Chronicles are written in the form of letters, interviews and diary entries so they are multiple first person.  The next novel I intend to write will be three lots of third person.  I would like to crack the second person and have read what I can; there are not a lot of novels in that format out there but it is a fairly depressing form and very difficult.  My small ambition is to manage the form and write a happy or upbeat second person narrative.
Morgen: Good luck with that. :) I’d say the majority of mine are dark but then, as you say, it lends itself to dark which is probably why I like it so much. As you say, few people have written 2ppov novels (Jay McInerney is probably the most remembered – I have it, it’s very dark). http://en.wikipedia.org/wiki/Second-person_narrative lists others. Speaking of dark, do you have pieces of work that you think will never see light of day?
Alberta: Oh yes.  However, if they don’t actually see light of day, they will be useful for plundering for other work!
Morgen: Absolutely, it’s recycling. :) What’s your favourite / least favourite aspect of your writing life?
Alberta: Favourite would be the living with the characters for months, getting to know them.  The least would be saying goodbye to them.
Morgen: Unless you bring them back in other stories. :) If anything, what has been your biggest surprise about writing?
Alberta: How much fun it is.  I have to prise myself away each night.  It’s a great life.
Morgen: Isn’t it. :) What advice would you give aspiring writers?
Alberta: Do it.  Don’t say you can’t – it may well be true but it equally may be wrong so go on and just ‘do it’.  Have confidence, do the research, accept there are lows as well as highs.
Morgen: Lots of lows (rejection, loneliness for some) but the highs make it all worth it… if you want to do it strongly enough of course. What do you like to read?
Alberta: Do you have time?
Morgen: Sure, as long as you like. :)
Alberta: Almost anything.  I don’t have any favourite genre but graze across them all.  Literary to fantasy it’s the story I’m after and if it’s a good story I’ll follow.
Morgen: In which country are you based and do you find this a help or hindrance with letting people know about your work?
Alberta: In the UK and I think it is harder to make yourself known worldwide if attempting to do it on the net.  However progress is being made.
Morgen: That’s good to hear. Are you on any forums or networking sites? If so, how invaluable do you find them?
Alberta: I have found them incredible helpful.  Fellow writers are very generous with their help and when I first ventured onto the sites feeling lost and forlorn they took me by the hand and led me through the ins and outs.  I have managed new software with their guidance, new skills helped by their advice.  They have led me to new places of interest, pointed me to sites that help the research.  Marvellous places networking sites.
Morgen: I’m pretty sure there’s no industry quite like writing… not as friendly (anyone reading this feel free to prove me wrong… or try). Where can we find out about you and your work?
Alberta: http://www.albertaross.co.uk (details my books, extracts, readers comments and contact information), http://sefutychronicles-albertaross.blogspot.com (where I blogs about writing, self-publishing and my books), http://www.didyoueverkissafrog.typepad.com (where I blog about anything I fancy). I can also be followed on Twitter (http://twitter.com/albertaross).
Morgen: Yep, a busy lady. What do you think the future holds for a writer?
Alberta: There will always be a place for storytelling in society – how the future for printed or electronic books pans out in the dwindling resource scenarios being waved at us is anyone’s guess but the stories themselves will always be around in some form or other.  Maybe in the future we won’t be writers but storytellers, everything turning full circle.
Morgen: Or both… Is there anything else you’d like to mention?
Alberta: Just that the Sefuty Chronicles are about survival in a world without almost everything we are used to.  So a couple of question to your readers:
How good are you at the old skills?
What would you miss most if fossil fuel does run out, are we even aware what commodities need fuel?
and, if the world does heat up, how secure do you think our food supply is?
Ooh great, thank you Alberta. :)

Alberta spent the first part of her adult life travelling the world, the middle years studying and now has settled down to write.  From the first part she has endless photographs, memories and friends.  From the second she has a BSc Hons, an MA and friends.  Now in the third part everything comes together.
Over the years Alberta’s interests have expanded, as has her book and music collection.  A shortlist would include reading (almost anything), science, opera, folk, gardening, philosophy, crazy patchwork, freeform crochet, ethics, social history, cooking (and eating of course), gardening, anthropology, climate change and sustainability.
She claims her parents gave her, apart from a love of reading and music, an interest and curiosity in everything which in itself has become a total inability to be bored and for this she is always grateful.

Update July 2012:﻿ The third of The Sefuty Chronicles series – Jack’s Tale  was published at the end of last year, and I am half way through the first draft of the fourth The Ancestor’s Tale – hopeful for the end of this year or beginning of next. I have created two trailers so far for the series: The Sefuty Chronicles (which gives a background to the series) and Ellen’s Tale being the first of The Sefuty Chronicles﻿.
I had to change my printers because of costs, I went with Lulu, and so have had to change all my covers and I have kindled the books so new purchase links are: Smashwords for multiple formats, Lulu for print copies and Amazon for the Kindle. The attempt at a modern novel which was to be started last November in NaNoWrMo is now a robust WIP with a hopeful date to publish next summer, 2013. I re-formatted my short story collection for e-books splitting them into 3 shorter books. This year I am hoping to bring out the first e-book of what will be a new collection – this one will concentrate on the fairy/myth/magical side of short story writing. And for this year’s NaNo I am attempting a creation myth story – with bacteria and virus as the heroes!:)
***
If you are reading this and you write, in whatever genre, and are thinking “ooh, I’d like to do this” then you can… just email me and I’ll send you the questions. You complete them, I tweak them where appropriate (if necessary to reflect the blog ‘clean and light’ rating) and then they get posted. When that’s done, I email you with the link so you can share it with your corner of the literary world. And if you have a writing-related blog / podcast and would like to interview me… let me know.
You can sign up to receive these blog posts daily or weekly so you don’t miss anything… and follow me on Twitter where each new posting is automatically announced. You can also read / download my eBooks and free eShorts at Smashwords, Sony Reader Store, Barnes & Noble, iTunes Bookstore, Kobo and Amazon, with more to follow. I have a new forum, friend me on Facebook, like me on Facebook, connect with me on LinkedIn, find me on Tumblr, complete my website’s Contact me page or plain and simple, email me.  I also now have a new blog creation service especially for, but not limited to, writers.
Unfortunately, as I post an interview a day (amongst other things) I can’t review books but I have a feature called ‘Short Story Saturdays’ where I review stories of up to 2,500 words. Alternatively if you have a short story or self-contained novel extract / short chapter (ideally up to 1000 words) that you’d like critiqued and don’t mind me reading it / talking about and critiquing it (I send you the transcription afterwards so you can use the comments or ignore them) :) on my ‘Bailey’s Writing Tips’ podcast, then do email me. They are weekly episodes, usually released Monday mornings UK time, interweaving the recordings between the red pen sessions with the hints & tips episodes. I am now also looking for flash fiction (<1000 words) for Flash Fiction Fridays and poetry for Post-weekend Poetry.
Posted by Morgen With An E at 06:00