Back in July 2011, I interviewed author Stoney Compton for my WordPress blog. I hope you enjoy it...


Welcome to the fifty-sixth of my blog interviews with novelists, short story authors, poets, directors, bloggers, scriptwriters, autobiographers and more. Today's is with author of speculative/alternative history/science fiction Stoney Compton. If you like what you read, please do go and investigate the author further. A list of interviewees (blogged and scheduled) can be found here.
Morgen: Hello, Stoney. Please tell us something about yourself and how you came to be a writer.
Stoney: From my earliest memories I have been fascinated by graphic images. I vividly

remember trying to draw a truck when I was in kindergarten and being absolutely pissed that it didn’t look right.
Morgen: An early perfectionist. :)
Stoney: The only classes I really liked in high school were art and American history. After an enlistment in the Navy I went to college and majored in Art and American History and Education. Minored in anthropology and sociology. While working on a second degree I was offered a job with the Tanana Chiefs Conference in Fairbanks (I was going to college at the University of Alaska, Anchorage) to create a comic book for Athabascan teens that touted careers in the health fields. The job lasted two years (they kept me on after the comic was finished) and became an in-depth saturation in another culture. I loved it. Fast forward a decade or so and I was in Juneau supporting a wife and two kids doing freelance graphics and doing fine art in my downtown studio (my ex-wife also had a steady job with benefits which helped a lot!). Alaska ran into a down period in its perpetual boom-and-bust cycles and my freelance contracts all dried up within a 48 hour period.
Morgen: Ouch.
Stoney: I had to give up the studio and move my etching press and painting gear into a closet in the three-bedroom house we shared with a sister-in-law and her daughter. All graphics work vanished. Since my then-wife and sister-in-law both had jobs, I became the care giver for my toddler son and niece. With no creative outlet I rapidly went feral.
Morgen: Oh dear.
Stoney: Then I came across the Writer’s of the Future, Volume 1 anthology. After reading all the stories and understanding it was a contest I decided, “Hell I can write this good!” So I started writing. I entered the WOTF contest at least eight times. I received an Honourable Mention and an excellent critique from A.J. Budrys. I rewrote Whalesong an

d sent it back – only to find that once rejected they wouldn’t look at the same story again.
Morgen: That does happen.
Stoney: So I submitted it to Robert Silverberg for his UNIVERSE 1 anthology and he accepted it.
Morgen: Even I’ve heard of him. The closest I get to fantasy is… no, maybe not, this is a family ‘show’. :)
Stoney: My very first fiction sale!
Morgen: Yay!
Stoney: I finally came in second in the 4th quarter of the 1993 WOTF contest. Eric Flint took first prize.
Morgen: What genre do you generally write and have you considered other genres?
Stoney: I write speculative fiction / alternative history / science fiction mostly. I also wrote a mammoth historical fiction novel that has been turned down by over 100 agents due to its length. So I am going to self-publish it.
Morgen: Did you try John Jarrold here in the UK? (http://www.johnjarrold.co.uk “Literary agent specialising in genre fiction, script doctor and freelance editor”) He’s actively looking (although fussy) as was at the Verulam Writers’ Circle’s Get Writing Conference both times I’ve been there (Feb 2010 / 2011).What have you had published to-date? If applicable, can you remember where you saw your first books on the shelves?
Stoney: Russian Amerika came out in April 2007, and the sequel, Alaska Republik came out in February 2011.  I was

working in Bellevue, Washington when Russian Amerika came out and I kept going to the Barnes & Noble down the block from my office looking for it on the shelves. Finally I asked about it and they said I could buy a copy and they would get it for me. I got rather pissy with them and stormed out. I wrote a letter to the manager and then I received a call from their advertising manager. It finally ended up with them putting the book on their shelves and doing a book signing on our office boardroom. About two weeks after that an artist friend emailed me that her husband saw it in an airport bookstore, which really made my day.
Morgen: How much of the marketing do you do for your published works or indeed for yourself as a ‘brand’?
Stoney: I am a bit of a tyro when it comes to marketing. I just designed bookmarks for my historical novel (Treadwell, A Novel of Alaska Territory) and had a thousand printed up. I attended the Historical Novel Society annual conference in San Diego, California in mid June. Next year it will be in London and I would love to attend! I was on an alternate history panel with Harry

Turtledove, Ann Chamberlain, and Christopher Cevasco. Great fun. I have also attended dozens of science fiction conferences as a “pro” and panellist.
Morgen: I bet that was fun.
Stoney: Beyond that I carefully tout my work on Facebook (but not too avidly – it turns people off), address any audience possible and get the odd interview here and there. I know I need to do more, but I still have a day job with an impossible commute, so I tend to write in my spare time.
Morgen: You have some? :) Have you won or been shortlisted in any competitions and do you think they help with a writer’s success?
Stoney: As mentioned earlier, I was a winner in the Writers of the Future contest. That was an absolute blast as they brought us all to Hollywood, California for a week-long writer’s workshop reminiscent of Navy Recruit Training.
Morgen: They taught you writing in the Navy? :)
Stoney: We met a lot of people in the field and Frederick Pohl gave me my framed award. Very giddy.
Morgen: I would be too (I dated a guy who was a big fan of his, and Larry Niven, Arthur C Clarke etc).
Stoney: Sean Williams from Australia was also in our group as was Elizabeth Wien. And, of course, Eric Flint.
Morgen: Do you have an agent? Do you think they’re vital to an author’s success?
Stoney: No. I have queried over 140 agents for one of my four manuscripts I am still flogging. My work doesn’t seem to suit. As I said earlier, I am going to self publish my historical novel and am seriously considering doing the same with two science fiction works and an adventure story. From what I can gather agents are mostly interested in large advances and contracts with large publishers.
Morgen: And I’d say especially more so these days.
Stoney: With publishing changing and the advent of eBooks and Print On Demand services available, a writer can now get 40% or more of the cover price and in the long run it’s royalties that count. Why should I give away 15 or 20% to an agent?
Morgen: Are your books available as eBooks? If so what was your experience of that process? And do you read eBooks?
Stoney: Both of my novels were published by Baen Books who was one of the first, if not the very first, publisher to offer eBooks to the public. My royalties include electronic sales. So far I only read printed books, and have an extensive library which I have shipped from Alaska to Colorado to Washington state to Nevada. It’s a good thing I love them so much.
Morgen: Wow. What was your first acceptance and is being accepted still a thrill?
Stoney: It was one of the happiest moments of my life. And yes, it is still a thrill to have an ms accepted. Now I preparing to put my work out there on my own hook (Pullo Pup Publishing is my legally registered business) and acceptance or 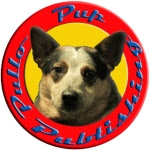 Morgen: Not at all. Be as shameless as you like… letting people know what you’re doing is partly why you’re here. :)
Stoney: Oh and to say that I sincerely appreciate the opportunity to be on your blog. You’re incredibly industrious!
Morgen: Well thank you very much (and you’re welcome). You’re not exactly a couch potato! :)
UPDATE: I picked up 'Russian Amerika' recently (yes, in the UK!) and although it's not my normal genre it's good to read different work isn't it? I'll let you know what I think. :)
If you are reading this and you write, in whatever genre, and are thinking “ooh, I’d like to do this” then you can… just email me and I’ll send you the questions. You complete them, I tweak them where appropriate (if necessary to reflect the blog ‘clean and light’ rating) and then they get posted. When that’s done, I email you with the link so you can share it with your corner of the literary world. And if you have a writing-related blog / podcast and would like to interview me… let me know.
You can sign up to receive these blog posts daily or weekly so you don’t miss anything… and follow me on Twitter where each new posting is automatically announced. You can also read / download my eBooks and free eShorts at Smashwords, Sony Reader Store, Barnes & Noble, iTunes Bookstore, Kobo and Amazon, with more to follow. I have a new forum and you can follow me on Twitter, friend me on Facebook, like me on Facebook, connect with me on LinkedIn, find me on Tumblr, complete my website’s Contact me page or plain and simple, email me.  I also now have a new blog creation service especially for, but not limited to, writers.
Unfortunately, as I post an interview a day (amongst other things) I can’t review books but I have a feature called ‘Short Story Saturdays’ where I review stories of up to 2,500 words. Alternatively if you have a short story or self-contained novel extract / short chapter (ideally up to 1000 words) that you’d like critiqued and don’t mind me reading it / talking about and critiquing it (I send you the transcription afterwards so you can use the comments or ignore them) :) on my ‘Bailey’s Writing Tips’ podcast, then do email me. They are weekly episodes, usually released Monday mornings UK time, interweaving the recordings between the red pen sessions with the hints & tips episodes. I am now also looking for flash fiction (<1000 words) for Flash Fiction Fridays and poetry for Post-weekend Poetry.
Posted by Morgen With An E at 18:00