Back on June 30th 2011, I interviewed author Erastes, the thirty-sixth for my WordPress blog. I hope you enjoy it...
Welcome to the thirty-sixth of my blog interviews with novelists, poets, directors, bloggers, autobiographers and more. Today's is with male:male historical novelist Erastes. If you like what you read, please do go and investigate the author further. A list of interviewees (blogged and scheduled) can be found here.
Morgen: Hello, Erastes. Please tell us something about yourself and how you came to be a writer.
Erastes: Hi!  Thank you for having me, Morgen.
Morgen: You can come again. :)
Erastes: I’m Erastes and I’ve been writing professionally since 2003. I discovered fanfiction in that year— 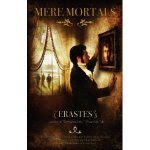 Erastes: Everything you need to know is on my website at www.erastes.com. Some of the graphics might be invisible with some browsers, I’m in the process of having a new one made. (I do have a Wiki page, too, but I don’t know who created that, so I don’t know how up to date that is)
Morgen: Ooh, I’d love one of those but then I need to have done something. :) What do you think the future holds for a writer?
Erastes: Oh, the future’s pretty bright. People will always want to read, however the medium to do that changes, and with independent publishers springing up all the time, and with self-publishing now cheap and easy, it’s very easy to get into print. It all depends on how much you want from it, and how hard you are prepared to work.
Morgen: Yes, you definitely get more out the more you put in. Is there anything else you’d like to mention?
Erastes: 1. Find good Beta readers. 2. Read read read – especially in the genre you want to write in. 3. And write write write, even if it’s not great yet. You’ll only get better by practice. Don’t go saying “one day I’ll write that book.” Start it today, it won’t get published in your head. 4. Expect everything to take TIME, publishing isn’t a quick business. I’ll shut up now.
Morgen: Please don’t, it’s been fun. Thank you.
Erastes is the penname of a female author who lives on the Norfolk Broads in England. She writes gay historical fiction and reviews it on Speak Its Name. She used to work in the legal profession but found that it gave Wolfram & Hart and bad name. She likes cheese and cats but only one of those is any good with toast.
MB: If you pick off the hairs. :)
If you are reading this and you write, in whatever genre, and are thinking “ooh, I’d like to do this” then you can… just email me and I’ll send you the questions. You complete them, I tweak them where appropriate (if necessary to reflect the blog ‘clean and light’ rating) and then they get posted. When that’s done, I email you with the link so you can share it with your corner of the literary world. And if you have a writing-related blog / podcast and would like to interview me… let me know.
You can sign up to receive these blog posts daily or weekly so you don’t miss anything… and follow me on Twitter where each new posting is automatically announced. You can also read / download my eBooks and free eShorts at Smashwords, Sony Reader Store, Barnes & Noble, iTunes Bookstore, Kobo and Amazon, with more to follow. I have a new forum and you can follow me on Twitter, friend me on Facebook, like me on Facebook, connect with me on LinkedIn, find me on Tumblr, complete my website’s Contact me page or plain and simple, email me.  I also now have a new blog creation service especially for, but not limited to, writers.
Unfortunately, as I post an interview a day (amongst other things) I can’t review books but I have a feature called ‘Short Story Saturdays’ where I review stories of up to 2,500 words. Alternatively if you have a short story or self-contained novel extract / short chapter (ideally up to 1000 words) that you’d like critiqued and don’t mind me reading it / talking about and critiquing it (I send you the transcription afterwards so you can use the comments or ignore them) :) on my ‘Bailey’s Writing Tips’ podcast, then do email me. They are weekly episodes, usually released Monday mornings UK time, interweaving the recordings between the red pen sessions with the hints & tips episodes. I am now also looking for flash fiction (<1000 words) for Flash Fiction Fridays and poetry for Post-weekend Poetry.
Posted by Morgen With An E at 18:00